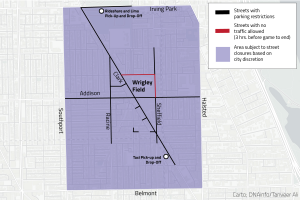 WRIGLEYVILLE — The Cubs will play the Nationals in Washington, D.C., Friday and Saturday for the National League Division Series.

On Monday, the series moves to Wrigley Field — and that means, among many things, street closures and parking restrictions.

ComEd trucks will stage at the following substations during both away and home games throughout the postseason, meaning there will be no parking allowed anytime from Friday through Oct. 12 at the following locations:

The following street closures will be in effect approximately three hours prior to each game until the end of the game, as determined by the Chicago Police Department. Pedestrian access will remain open.

Expect street closures between West Belmont Avenue and West Irving Park Park Road from North Halsted Street to North Southport Avenue. At the discretion of the Chicago Police and OEMC, arterial streets might be closed to all vehicular traffic. You should have photo ID and proof of residence available for presentation to any public safety official, police officer or traffic management personnel.

Getting around during postseason

Remote parking is available at the remote lot at 3900 N. Rockwell St., with a free shuttle to the ballpark. The parking lot opens about five hours before each game.