A Fyre Night at The Annoyance

Previous Next
A Fyre Night at The Annoyance

I know you’ve all been waiting for my next post, on the edge of your seats, wondering what fun in Lakeview I’ve come to tell of next.  Gather round, my children, and listen to the tale of The Annoyance Theatre and Bar.

Last week, I took a trip to the comedy theater, located a mere two-minute walk from the Belmont redline. I was there to see “Shit Fyre,” a musical parody of the 2017 Fyre Festival. 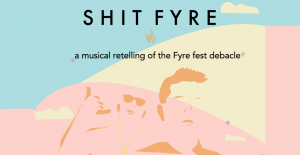 If you aren’t familiar with Fyre Fest, I suggest checking out one of the documentaries about it, available on Netflix and Hulu (if you don’t have access to either streaming services, I’m willing to share my account information for a small fee of $300). Though I was there for this specific show, The Annoyance has several other shows playing throughout the week, and the schedule is constantly changing, introducing new shows to replace the old.

I’ve performed in the weekly standup showcase at the theater before, but this was my first time seeing an actual production, and I was excited! Even if you aren’t active in the Chicago comedy scene, it’s hard to not have known The Annoyance as one of the most reputable comedy venues in the city.

When I arrived, the first face I saw was Tom, the bartender. All smiles, he helped direct me to the correct theater as the venue has several, and I, a noob, wasn’t sure where to go. He introduced himself after I explained it was my first time seeing a show there, which I thought was sweet. He also hooked me up with my first drink of the night, a vodka on the rocks (but you already knew that). Once the theater opened (about ten minutes to showtime), we found our seats. I’m not sure if this is protocol for all shows, but this one had open seating. I chose a spot off to the side, where I could hide the fact that I was alone. The rest of the audience filled the front and middle seats, which is prime seating in my opinion.

There was a large party of about 20 people, which we quickly learned was there to celebrate a birthday. The director of the show came out and announced it to the audience, and led us in singing to the birthday boy. It was a nice touch.

Next I met Ethan, my server, who was an absolute peach. He was attentive, but not pushy. He made sure everyone had everything they needed. “Drinks, food, emotional support, I’m here,” as he put it.

Finally, the show started. Featuring a smaller cast, it was extremely funny and well-written (not that I’m surprised). Though this particular night, I feel like the audience missed out on a bunch of jokes, but I was there, cackling to myself in the corner (two vodka rocks will do that to you). The talent was there, both in comedic timing as well as singing–and there was a lot of singing. See a fun video below from The Annoyance’s Facebook page from the show.

ShitFYRE: A Musical Retelling of the Fyre Fest debacle

The show lasted about an hour and some change, air a 15-minute intermission. I assume this is a typical running time for most shows at the venue. I can’t imagine any show running more than two hours. And that, ye kiddies, is the tale of The Annoyance.

Unfortunately, the last day of the show was February 21st, but that being said – almost every Annoyance show is just as funny, creative, and put together (unlike the Fyre Festival itself).

So go check out any one of The Annoyance’s other spectacular shows. Check out theannoyance.com for showtimes and tickets.