Located north on Clark Street, just a block away from historic Wrigley Field, lies one of Chicago’s most treasured venues, The Metro. Having opened in 1982, The Metro is celebrating its 40th anniversary this weekend! 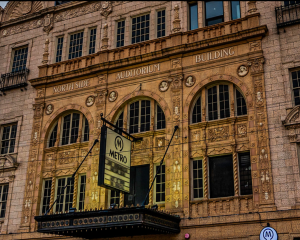 Photo courtesy of The Metro

Chicagoans have had the opportunity to see some of their favorite artists live at this Wrigleyville rock spot, some of which have the biggest names in the music industry. Nirvana played here back in 1991 a week prior to Nevermind being released, and more recently The Strokes performed in June of this year. Perhaps you’ve attended a show yourself but never bothered to learn the history behind the landmark. Owner Joe Shanahan is the man behind the curtain, responsible for the venue’s success.

“Shanahan began his journey in artistic propriety as a Columbia College graduate with a keen ear for the underground music shaking Chicago’s musical core. Shanahan spent his post-collegiate years trekking to New York and London to experience the happenings redefining the global arts community. He returned with an ‘act local, think global’ business philosophy and an urge to fill the void in his home city’s art scene” (The Metro). Wrigleyville hasn’t always been a trendy destination for Cubs fans and young adults looking for a wild night out. Thrillist Chicago conducted an article with Shanahan back in 2016, where Shanahan recalls Wrigleyville, “Was full of really funky cheap apartments… The Cubs weren’t playing very well then and the area was dicey. I remember most nights we didn’t let any of the cash walk out without at least four guys taking it to the local bank for a nighttime deposit. There was a lot of heroin and a lot of gangs, so we got to know our alderman and the commander CPD guys real quick. They were happy we were bringing music and a kind of cultural shift into Wrigleyville at that time.” 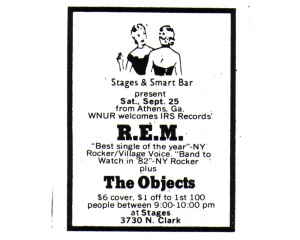 Photo courtesy of The Metro

R.E.M was the first band to ever perform on The Metro stage, however at the time The Metro was a club called Stages Music Hall. Shanahan hadn’t been the owner just yet, and was just renting out different rooms in the club. He attended a R.E.M show in New York City, and invited R.E.M to come play at Stages in Chicago sometime. Shanahan recalls, “I did get that phone call because they had a promoter drop out and they were like, ‘Can you put on our show tonight?’ It was the first show I promoted and maybe 500 people showed up. I was able to pay all the bands, I was able to pay all the staff, and then I had money left over for pizza and beer. And I thought, ‘That was it. We’re a success” (Thrillist).

If you’ve been to The Metro, then you must be familiar with Smartbar, the underground nightclub that bumps music from Funktion One speakers until the early morning. Night owls have been flocking to Smartbar for 40 years now, and it is home to Chicago’s techno and house music scene.  Before Smartbar became a electronic music haven, it used to be a reggae club called Cool Runnings. “It was great, because we’d have these punk kids and punk shows at Metro, and then this pretty great reggae club beneath the Metro” (Thrillist).  When visiting Smartbar today, expect loud music bumping on massive speakers, a fog machine to add a hint of mystery, and an energetic dance floor. 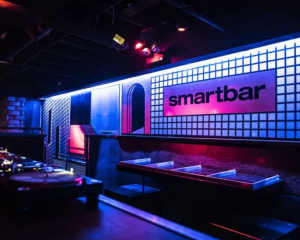 The Metro and Smartbar continue to be one of the most legendary places in Chicago. Metallica threw a secret set here in 2021, with only 850 audience members in attendance. Josh Young from Flosstradamus worked as an intern before scoring success in the EDM scene. Courtney Love’s band HOLE played at The Metro on October 21, 1994, which was the first tour she went on since Cobain passed that April. Be a part of the legacy this weekend, as The Metro throws a huge 40th-anniversary party. 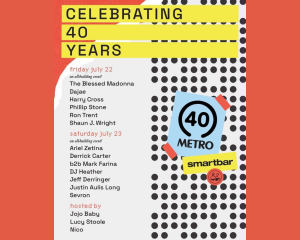